A major disagreement between archaeological giants over a 2008 discovery at the City of David, Jerusalem remains unresolved. The modern equivalents of Macalister and Duncan, Reich and Shukron, who excavated sections of the lower and upper ridges near the Gihon Spring remain ~1000 years apart in their time estimates for a critically important upper ridge discovery. By professional standards its a serious issue that could eventually backfire on Israel's Antiquities Authority.

Its not unusual for archaeologists to challenge each other with evidence based theories including at  the Gihon Spring. Recently Dr. Joe Uziel discovered evidence that presented a similar time conflict. Under the north-eastern corner stone of the Bronze age citadel construction adjacent to the Gihon Spring, seeds were carbon dated by Weizmann Institute to the Iron age. The seeds were presumed to be in their original location, but if they had been washed under the corner stone, in a prior rain-storm the arguments over Iron or Bronze age dating would be futile.

To elucidate the futility, myopic archaeological reporting is often contained to single fragments of evidence that draw inferences absent of broader context discoveries found in proximity. For example Jerusalem's oldest constructed cave was probably a mansion carved into the east face of Mount Moriah, south of the upper Gihon Pool.

Further up the eastern face, a tomb containing ~4000 year old sophisticated tomb pottery was discovered by Parker-Vincent. Importantly this early Bronze Age tomb pottery dates Mount Moriah's first permanent population to a similar time in which the cave home on the eastern face would have been in use.


Direct evidence does not link the tomb pottery to the cave, but both were sophisticated developments of that time. The cave would have been constructed by skilled laborers and the pottery by refined artisans indicating the importance of the individuals to whom these discoveries were once attributed. Leading archaeologist Hillel Geva made it clear that Mount Moriah was sparsely populated until much later periods when permanent construction on the mountain expanded from around 3800 years ago, around the time of Biblical Abraham.

One of the most compelling observations echos a ziggurat like stairway the lower sections having been partly reassembled with steel staircase. Immediately adjacent, north of the cave, the base of the stairway was once quarried in sloping bedrock, but today it is a sheer-rock-cut-face that reshaped the natural slope of the bedrock to displace or destroy the arrangements that once provided gradual stepped-access from lower to upper ridge.

The slope may have first been reshaped to include steps for easier access on the ~30 meter rise (see profile image below) from the lower rock shelf, at the cave's natural entrance to the stairs leading to the high ridge. Interestingly, the lower section of stairs would have once landed on the east face of Mount Moriah, as it falls to the Kidron Valley, but the dramatic absence at the now sheer-rock-cut-face appears related to the quarrying that ultimately formed the large impassable void of the Upper Gihon Pool (see image below).

In 2008 Eli Shukron broke through a false wall on the upper ridge and discovered that the stairway led directly to a sacrificial altar of a significant pre-Solomon temple complex. Soft sand filled the entire upper ridge spaces between the false wall on the east (side of Kidron Valley) and the western bedrock, below the city wall. Thousands of years before Eli's breakthrough, the temple complex had been cleaned of artifacts and purposefully buried, a fact that has not been officially revealed. Below, the four numbered rooms, notably #1 and #3 have short passages connecting these rooms with the upper section of the ridge as it makes its way higher and to the west. 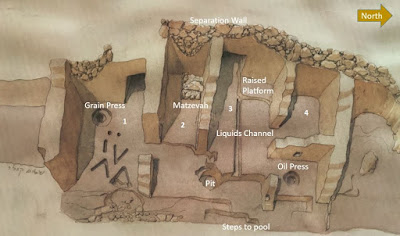 On the eastern bedrock, below the temple complex middle Bronze Age artifacts were discovered by Shukron and previous archaeologists, but several rooms built against the city wall (see image above) contained artifacts that were dated to the Iron Age. 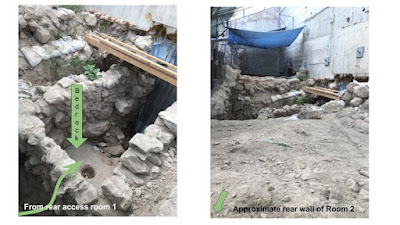 Based on the above,the definitive statements by Ronny Reich, as seen in the video below would therefore be an example of myopic archaeology. Eli Shukron has made public statements that the temple complex is a Bronze Age construct in direct opposition.

I'll leave it to you the reader to decide, which version is more likely just keep in mind that the standing stone or matzevah in room #2 (seen below) is most likely a relic from 3800 years ago, the the time of Israel's Biblical fathers, as such it is more likely to fit the context that supports the narrative of Eli Shukron.

Posted by Kevin Bermeister at 12:11 PM No comments: