Believe it or not, you are looking at Jerusalem's Mount Moriah. This once deserted mountain, nested among others is one rock from top to bottom between an eastern and western valley. On its lower eastern face, near the water of the Gihon Spring its first permanent cave dwelling, a living space with three sleeping quarters was carved neatly in the mountainside rock. A narrow single access passage provided a concealed entry for its inhabitants. The dwelling must have passed through generations, but the periodically and sporadically occupied mountain mostly remained desolate and the cave empty of inhabitants.


An important spiritual practitioner, perhaps an oracle, a priest and healer occasionally attracted visitors. Higher up the steep east facing slope, a ridge, a platform overlooked the water of the Gihon Spring as it ran along the Kidron valley floor. It became the meeting place for worshipers and advice seekers. Temporarily dwelling on the mountain they sought advice, prayed, brought sacrificial offerings and moved on.

Bronze Age artisans chipped away the bedrock of the ridge on the eastern face until hollow spaces formed depressions in the rock. The depressions were enlarged, shaped into rooms exposed to the sky. More rock-on-rock workmanship eventually smoothed vertical walls from the hollowed spaces, until the depressions became rectangular and bedrock walls arose from the bedrock floor that had been lowered by the artisans.

A low bedrock platform in room 3 was preserved by the artisans, it is the foundation of an altar and supports the holy purpose of the 4 rooms . Two rooms (1&3) preserved access to the rear (west), rising, undulating bedrock ridge, perhaps to facilitate movement of people, supplies or animals to be sacrificed.


Archaeologist recently revealed that the openings in the rear (west) of room 1 and room 3 provided access to the rising bedrock (follow green arrow in images below). Iron Age houses were built on top of the rear bedrock, but the evidence uncovered proved they were destroyed during events of the Babylonian conquest of Jerusalem. Their rudimentary basements penetrated to the spaces at the rear of room 1 and 3, but their occupants never accessed these four rooms because in 2008 Eli Shukron discovered these rooms had been purposely buried in soft sand, concealed by a false wall on their eastern front, which he deconstructed.

In the rear opening of room 1, clay weights, once used as part of a weaving loom were discovered (Ronny Reich). Immediately north of this ridge Kathleen Kenyon excavated a trench behind a Middle Bronze Age wall in which pottery shards and hundreds of broken artifact idols were uncovered, but her dig did not discover these rooms.


The features chiseled into the bedrock were confirmed to have been made by rock implements and may have been added progressively. At some point after completion of room 2, a unique matzevah (massebah) or standing stone was placed onto the bedrock. This matzevah has been standing in its place, on the bedrock of the high ridge ever since it was first erected, preserved by the soft sand burial. Most likely this area was preserved before the Babylonian destruction, because it was cleared of artifacts and void of any destruction layer evidence found in the Iron Age rooms to the west. 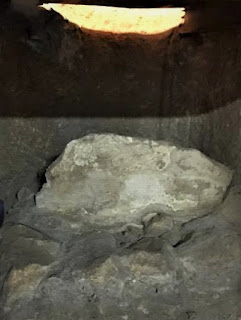 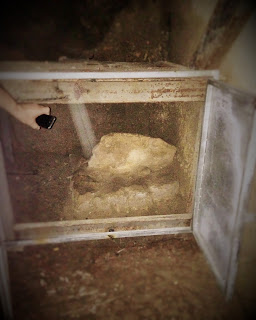 How long did room 2 exist before the matzevah was placed? Did room 2 serve an initial purpose other than for the placement of the matzevah? To answer some of these questions we will explore the Bronze Age cave home and ridge complex to chronologically estimate whether they were contextually related.


The cave dwelling on the lower eastern face was first re-discovered by Colonel Montague Parker and Père Vincent between 1909-1911. In the only published picture of the cave he is seen sitting with backer and writer Valter Juvelius. Although this cave was preceded by smaller paleolithic sites on the eastern face, this Chalcolithic to early Bronze Age cave is considerably more sophisticated.

To the north, an early Bronze Age tomb and advanced pottery were discovered by Parker-Vincent. The pottery and cave indicate the importance of the occupants and their relative prominence. 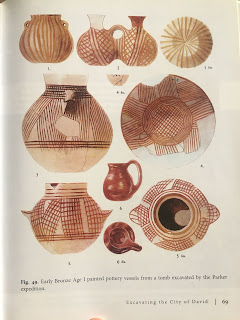 The living area of the cave dwelling and 3 sleeping quarters can be seen @ K 19,20,21 (bottom left)  of the map that Vincent compiled during his excavations. The rectangular area marks the site of the present excavations immediately west of the four rooms on the high or upper ridge (circled). 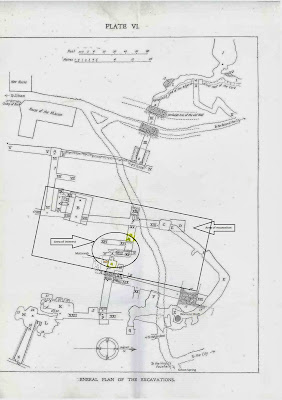 In the Bronze Age water was first channeled from the natural Gihon Spring, on Mount Moriah's  eastern face to the round chamber that was eventually expanded to become the rock cut upper Gihon pool.


The expanded upper Gihon pool, adjacent and north of the cave dwelling was apparently constructed to hold water and spill excess to the stream along the valley floor. However, water pressure and  mountain slope are unlikely to have filled much more than the lower sections of the round chamber. Bones of kosher animals, fish and many pictorial bullae were discovered in the pool.

Between the Cave dwelling and Upper Gihon Pool archaeologists have re-established an ancient stepped structure that was purposely quarried and terminated. It must have been the original access on the eastern face of the mountain.


Significantly and curiously the next major construction (to the north) appears to be the fortress above and over the Gihon Spring (House) and some of the eastern walls surrounding the city. The bedrock features left (south) of the red line, which were rediscovered by Eli Shukron and Ronnie Reich in 2008 have not been rendered into the black rectangle in the next artist impression and many artist interpretations like this fail to incorporate their significance. The impression below approximates the later Bronze, early Iron Age city around the time of Biblical Joshua.

Archaeology clarified that water sourced from the Gihon Spring was not necessarily the object of the significant Gihon Fortress (David Citadel) construction. The image and map below demonstrates that water was originally channeled from the Gihon (left-north) to the middle Bronze Age Round Chamber (right-south of rock "B") and from there it flowed east to the valley floor. Once this became the default channel, the previous route may have been blocked to prevent water entering the Round Chamber, which expanded to the rock-cut upper Gihon pool, but excess water to the valley floor continued to flow freely.

The map below demonstrates the round chamber of the rock-cut upper Gihon pool (grey box) was first fed by Tunnel III. Channel II and Channel I indicate the by-pass discussed in the image above, which flowed water to the lower pool (adjacent to rock "B" located in map below). It also shows the Spring Tower Fortification (cream color) made of large boulders constructed on top and adjacent to the older grey rock-cut bedrock elements. 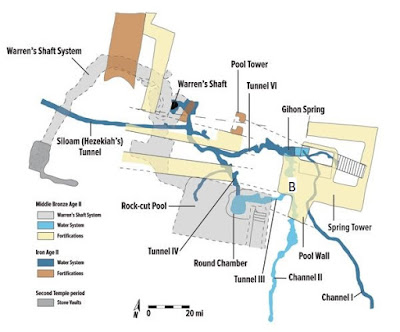 Water does not appear to have been the motivating reason for construction of the very significant Fortification adjacent to the Gihon Spring because water continued to flow to the valley floor during the Iron Age II until the reign of Hezekiah.


The remaining Fortification massive boulders (image above - looking west) are neatly arranged up the steep eastern slope to eventually butt up to the city wall. This significant construction appears to have been designed to stop north-south access (across the red line) to the high ridge. The ultimate construction completely blocked access to the high ridge, including from the original lower bedrock of the now quarried upper Gihon pool and prioritized water flow to the lower Gihon pool, most likely blocking water flow to the upper pool.

The motivation for this most significant, multi-national, labor intensive construction of the Fortification corridor favors obfuscation of the high ridge and cave dwelling complex on the eastern face of Mount Moriah.

Whether or not the high ridge was obfuscated prior to or by King David or revealed during King David's reign or by Hezekiah during the construction of his channel remains unknown. However, matzevot, standing stones (like the matzevah on the high ridge) were not permitted after the period of Abraham, Isaac and Jacob, as clearly commanded in the Bible.

Well before Herod, Solomon-David or Joshua, there was a matzevah erected on the high ridge of the eastern slope of Mount Moriah in a location that included a substantial cave dwelling and temple complex that was once used for regular holy worship. Temple Zero pre-dated temple one or two by more than 1000 years and is attributed to the time of Biblical Malchi-Tzedek.

The Matzevah is most likely the one erected by Jacob and the subject of many articles at this blog.

Posted by Kevin Bermeister at 9:23 PM