The Secret of the Seder's Fifteen Steps 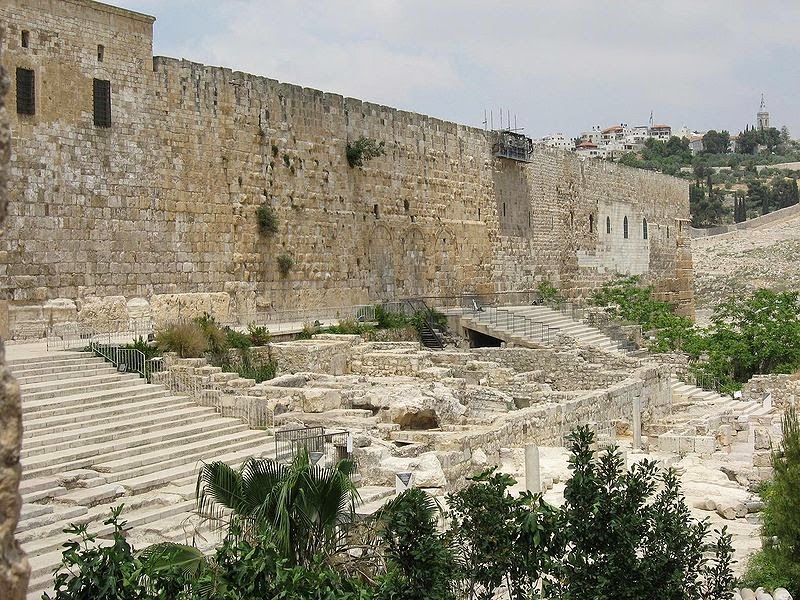 The Hebrew calendar is unusual because Nisan is the first month, associated with Passover or Pesach the holiday of redemption. But, its opposite end, the seventh month, Tishrei is the Jewish new year including the holiday of Sukkot. Kabbalah teaches equal in opposites, so what about Sukkot can we learn about Pesach?

There is  teaching that the lower feminine waters (of the Gihon Spring) complained to God, “We, too, want to be close to You!” God consoled them, saying, “There will come a time when you, too, will be close, when your waters will be poured upon the altar during Sukkot, to celebrate.” At Sukkot the Levite priests sang spiritual songs that kept Jerusalem wide-eyed till dawn as they stood upon the “fifteen steps of descent from the Israelite courtyard to the women’s courtyard, that correspond to the fifteen ‘Songs of Ascents’ composed by King David.  But, the priests descended those fifteen steps?

Rav Chisda asked “a certain rabbi” why King David composed these fifteen Songs of Ascents to begin with. The rabbi replied that when King David began excavating the foundation of the Temple’s altar, the waters of the subterranean deep rushed upwards and threatened to engulf the world. Then, King David composed fifteen Songs of Ascents, and the depths safely subsided. If so, Rav Chisda protested, why are they not called Songs of Descent, to reflect the subsiding waters.

Replied the anonymous rabbi, this is what occurred: When the deep surged upwards, King David thought to inscribe God's Name on a piece of earthenware and cast it into the waters. His teacher, Achitofel, ruled it permissible reasoning; if according to Torah, for the sake of matrimonial harmony, God commands us to write His Name on parchment and to erase it by placing it into a container of water for an alleged unfaithful wife to drink and redeem herself, then it is certainly permissible for King David to cast the divine Name into the surging waters to bring peace to the entire world!

King David immediately wrote and cast The Name into the waters, which then subsided sixteen levels. Surprised, the King realized the earth’s irrigation would be reduced, so he voiced fifteen Songs of Ascents that brought the waters back up to a safe and desirable level.

In his commentary on the Talmud, Maharsha adds that the divine Name King David wrote was with the letters Yud-Hei, which equates the numerical value fifteen. The Name is associated with the final redemption of the Jewish people. The two priests who descended these steps on the way to draw the water on Sukkot would pause on the tenth step, to divide the steps in two parts, ten and five, corresponding to the Yud (ten) and Hei (five) respectively.

Maharal quotes the verse from Isaiah 26:4, “For in God (Yud-Hei) is the strength of the worlds.” Our sages stated that all creation comes into being via these two divine “letters,” Yud and Hei. These letters comprise “form” that comes from the Yud, and “matter” that comes from the Hei. These reflect the spiritual worlds united with the material.

This, then, is the Kabbalistic secret behind the fifteen Songs of Ascents corresponding to the Temple steps that directed people to the higher world, from the more material, “feminine” women’s courtyard, toward the more spiritual, “masculine” aspect, the Israelite courtyard and ultimately the exclusive domains of the high priests. When a redeemed Israel left the entrapment of Egypt (Mitzrayim) they first journeyed through the lowest waters, the bottom of Yam Suf meaning Reed or some say Sea at the End where they cast their souls, comprising God's name, into the waters and from where they ascended as a nation.

Each year Jews the world over renew the months that will follow by ascending through 15 steps of the Pesach seder (the Passover meal). They pause after the tenth step during which they re-enact eating the pascal lamb sacrifice that saved them from disaster. Then, they continue the last of five steps with the festive meal of the seder. From the digestion of the holy Pesach meal, they are infused and elevated. Six months later they descend 15 steps at Sukkot when they unite the Lulav (Palm) and Willow branches of the lower waters. At that time meals are eaten and elevation is by the encompassing Sukkah, the natural hut Jews live in during that week each year.

Christians adjust their calendar to tie Easter to Pesach and Jews dedicate the water festival of Sukkot for all the nations. We are living in the years considered to be the millennial hour, the time of transition, at the doorstep of Moshiach (Mesiah) and Israel's final redemption. The 15 steps of the Pesach seder compliment Sukkot’s 15 holy steps of the Temple. With the realization of this inner beauty, perhaps we will live a peace that is the Jewish dream. Then those who live and celebrate in Jerusalem will no longer need to utter the Seder's redundant concluding words "next year in Jerusalem"!

Posted by Kevin Bermeister at 2:57 PM No comments:

Searching for the Mizbeach (altar) of Akeidat Yitzchak (Isaac)

There is good reason to believe the area on the high ridge above the Gihon Spring (at the City of David - Jerusalem) is Luz that Yaakov (Jacob) named Beit El. To support this I include links to my research, but it starts with an attack on the conventional view of Ay or Ai, the ancient city or location first associated with Avraham (Abraham).  I propose the Beit El and Ay of Avraham (Bereishit 12:6–8) conforms to the following map of Jerusalem's holy basin (click to enlarge it) and the book of Yehoshua (Joshua);

The completed thesis can be obtained here Jerusalem Origin - The Thesis

The other, different location for Beit-el and Ay (north of Jerusalem), made popular at the time of King Yerovam ben Nabat (Jeroboam), was a ‘deception’, a duplicate of the familiar geographical names surrounding and preceding the first temple holy basin. Yerovam established these, continuing Micah's Beit el tradition (400 years prior), to heist the northern nation of Israel into believing his priests, temple and idols were a suitable substitute to Jerusalem's. You can read support for this cornerstone including its economic incentives here - http://israelfact.blogspot.com.au/2012/10/solving-riddle-of-beit-el-and-beit-el.html

Once the remnant of Yerovam’s confusion is removed we can focus on essential issues. These include; the geophysical flow of aquifer water from the high valley of Hevron (Hebron) to the low point of Yam Ha Melach (Dead Sea) via the ridge that terminates at Har (Mount) Moriah and the E’ven Ha Shtiya (Foundation Stone) under which the aquifer flows north, u-turns then flows east. [see the Geotechnical-Hydrogeological survey http://www.gsi.gov.il/Eng/_Uploads/163Geotechnical-Hydrogeological-Concern.pdf].

Now we can review the archaeological site above (west of) the Gihon and the area of Salem, the characteristics of which are highly unusual and detailed in the image below. The most notable of these features is the matzevah (monument or pillar), which has miraculously survived more than 3500 years and is yet to be officially announced. I challenge you or anyone else to find a similar object in any site in Israel – such a perfectly preserved item built onto bedrock and still standing does not exist.

My theory, which is described broadly here http://www.scribd.com/doc/120128721/Jerusalem-s-Origin explains this is the site of the matzevah Yaakov anointed (Bereishit 35:14-15). There are many midrashic references to this site including the source of the stones Yaakov used for the matzevah – the mizbeach of Akeida Yitzchak and these can be discovered in the more detailed paper here http://www.scribd.com/doc/76553825/The-Stone-the-Builders-Rejected.

Armed with this information we can progress to the decision David Ha’Melech (King David) made to locate the temple mizbeach (altar), that became the site for the first and second temples on the top of the hill (around the Dome of the Rock). Here you can read about the process he endured to navigate Jewish law and make that very difficult decision - http://israelfact.blogspot.com.au/2012/05/sword-over-jerusalem-sources-from.html. Whilst I don’t fully expose my view in this paper, I believe he prophesied about the final temple at the end of days and as a result made a conscious, albeit very difficult decision, to obfuscate the site of Akeida Yitzchak (the altar site) from nations of the future to protect the true site, which he knew about.

Finally I present the very detailed sources from which I draw the conclusion it is possible to have the third temple at this site without disrupting existing sites on the top of the mountain. http://israelfact.blogspot.com.au/2012/09/israel-and-nations-detailed-sources_18.html


Posted by Kevin Bermeister at 1:26 PM No comments: