Shavuot celebrates the day the nation of Israel received its Torah (The Bible) and is associated with blossoming trees, flowers, milk and honey. Honey is the only kosher bi-product to come from a non-kosher producer, so what paradox were Israel’s greatest scholars and mystical thinkers trying to convey as to uniquely regard it in Jewish law?

In a recent documentary on ‘shapes in nature’ mathematician Marcus DuSautoy discussed honeycombs hexagon shape, which he declared to be nature’s most efficient because of the number of sides a hexagon can share with a neighbor.The beehive’s symmetrical compartments differ from anything else in nature where order is usually affected by disorder or entropy resulting in the rugged irregular appearance of natural objects. For example the disorder in nature can be seen in trees and their branches, or mountains, or even snowflakes where one in a million approaches perfect symmetry, but almost all never quite make it.

The interest in symmetry and its relationship to the natural world has a long history. The Ancient Greeks became obsessed to discover nature’s underlying building blocks and Plato identified five perfect symmetrical shapes well before modern science could see molecular structures. Several thousand years earlier the great mystics had already reached their conclusions about nature and symmetry. The most sophisticated and earliest living document used by the Greeks in their quest for insight into nature was Hebrews uniquely alphanumeric Torah - The Bible. Here’s a glimpse of their discovery in the numerical values derived from the value of its 22 letters in the first 7 words of its opening verse (read from right to left); 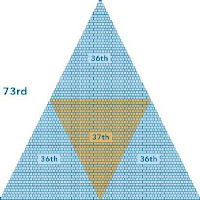 The large triangle is the 73rd drawn with 2701 blocks. It contains the inverted 37th triangle drawn with 703 blocks, and three 36th triangles each with 666 blocks.

The three sides of the 37th triangle (in the middle) intersect the 73rd’s sides at each midpoint (37th).

The edges of the 36th triangles are drawn with 216 blocks also equal to the 6x6x6 cube - the only known cube with a superficial area equal to its volume. 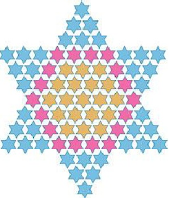 The words in the opening line of Torah exhibit symmetry that is not visible in nature where disorder prevails. So, why reflect perfect order in the opening verse in which the natural world is created, a seeming contradiction to natural disorder? This paradox fascinated Greek thinkers who through their observations of the material world revealed mathematic and scientific distortions that would undermine the logic of Torah’s unified spiritual proposition.

Whilst the Greeks were leading the world to adopt a more material philosophy to explain logical reasons for the Honey Bee's hexagonal hive, Israelites were focused on emphasizing their spiritual origins. Ancient Jewish spirituality drove the materialistic Greek intelligentsia crazy. They could not comprehend why Jews would follow a text promoting belief in and homage to a monotheistic God no-one could see, touch or render. Eventually the maddened Greeks capitalized on Jewish disunity conquering and defiling Israel’s holy temple in Jerusalem where their God might dwell.

In the natural world, the Torah represents God by His female attributes referred to as the Queen and the Jewish assembly is strongest when She is in their presence. This spiritual logic is reflected in the actions of worker bees that perfect natural disorder by subjecting themselves to serve the greater purpose of their queen. Indeed , this is the archetypal model for their successful existence. And so it is true with the Jewish people, for the more Jews subjugate to this principle of spiritual unity and symmetry, the more unified their nation becomes and when they embrace this psychological disposition, the nations of the world, the plants and the trees, reap benefits.

The uniquely Jewish paradox that kosher honey emerges from non-kosher bees can now be understood. In nature, where disorder is the trending characteristic, order is achieved through reverence. In the unifying principle of monotheistic deference, which Torah proposes in its opening words, disorder is ordered. The bee is a worker devoted to lifelong service of its queen and the Jew pursues the same dedication to the unending presence of Queen with King that constitutes the God of Israel. Therefore, the bee represents the model ‘state of being’, an impure vessel producing that which is pure. The vessel never becomes kosher, however through the bees unquestioning commitment and service, pure honey - the product of the bees effort is awarded its unique recognition in the Jewish laws of Torah.

Posted by Kevin Bermeister at 8:16 AM No comments:

The Neck And The Site Of The Temple

Jewish scholarly works frequently relate the 'neck' to the Temple's location in Jerusalem. Verse 4:4 in the Song of Songs, can be translated from its 22 letter Hebrew origin to: "Your neck is the Tower of David, built as an ornament." Rabbi Chaim Vital, a student of 15th century Rabbi, Yitzchak Luria -- known as The Ari, quotes this verse in order to explain the secret meaning of Exodus 12:40 which describes the children of Israel as they left their state of exile, "And the dwelling of the Israelites in Egypt was 430 years."

To elucidate Rabbi Vital attributes five constrictions that distinguish God from His infinite state to establish the finite natural order. Rabbi Vital explains that God uses His name "Elo(h)im" which connotes constriction and is, therefore, representative of His natural manifestation. The numerical value of this name equals 86. Rabbi Vital brings this together by multiplying the 5 states of constriction by 86 which equals 430. Moreover, 86, God's constricted state also equates to the Hebrew word meaning "The Natural."

Returning to the Song of Songs, a few lines after the quote relating the Tower of David to the neck, the following line appears; "I have come into my garden, my sister, my bride." Rabbi Menachem Schneerson, drew inspiration from this for his inaugural work, Basi LeGani, which was written following the death of his father-in-law and presented upon his acceptance as the seventh and final Rebbe of Lubavitch. Basi LeGani describes the brilliance of release from exile relating its realization to the Temple in which God's name, in His ultimate state, is exclusively revealed. The physical Temple is simultaneously that deeply spiritual place discovered by an individual in which God, in His ultimate expansive state reveals one's truest and most soulful power.

The neck is the body's constricted conduit; at the front it houses, vessels for speech, nourishment, blood and breath, at the rear the protective spine feeds brain signals to the heart and body. In the time it takes for the brain's signal to pass through the neck Jewish mystics suggest the transfer of thought to physical action is at risk of disruption. For speech, synchronizing quickly formed brain signals to words from the larynx and mouth is often problematic. Overcoming this potential shortcoming is a free choice, moreover it is a choice in which one's state-of-mind is critical to the outcome.

In these verses, the Hebrew word used for the neck's ornament is 'talpiot' which is allegorically expressed by the sages as a contraction of two words that mean, "the heap (that was and will again be) beautiful" or "the mount (which and to which) all mouths (will) pray." The mystical interpretation of the ornament as an adornment to the neck could fill many books, but I wish to focus here only on its geo-physical implication.

In Jerusalem's City of David there exists a 'heap' or 'mound,' the subject of much excavation over the past 30 years. Today, this heap is known as the Tower of David and it is built over Jerusalem's only perennial spring known as Gihon. Recently, substantial excavations at this location revealed archaeological features so powerful they could literally rock the world. The findings contain bronze-age bedrock structures extensively used for sacrificial worship and, fortified to protect their sanctity. Around these structures all of Jerusalem eventually grew.

At this excavation a small, single monument, a sliver of stone that, remarkably (since no other like it has survived) remains standing after more than 3500 years. Supported in a frame of 12 stones, it marks the spot where Jacob slept on the night he fled from his home and the spot where he returned to accept the name Israel. Whilst this small stone is indeed monumental, its 12 supporting stones (according to Midrash) would have been extracted from the adjacent fully intact altar ramp. This altar was used well before Abraham offered his son Isaac, and that makes the site earth-shattering because, according to the scholarly works, yet contrary to all expectations, it would also mark the spot for Jerusalem's third and final Temple.

Topographically, the exposed bedrock of this sacred mountain, visible in its entirety in the bronze-age, would have resembled a head and neck when viewed by Abraham from his southern approach. Additionally, the location of the Tower of David at the present excavation would approximate the place on which an ornament adorning the neck would lie. King David re-conquered this mountain on which a fortified city had previously been founded. From the City of David, he planned the first Temple, never knowing, realizing or revealing its true location. David's son, Solomon, eventually built the Temple where his father planned, on the head of the mountain within the approximate boundaries of today's Temple Mount where the second temple was also built.

If we pay attention to the overwhelming preponderance of evidence from the Bible's exegesis, the location of the Tower of David as the neck's ornament marks "the heap (that was and will again be) beautiful" or "the mount (which and to which) all mouths pray", yet this is the site which King David denied us when determining his plans. Therefore, in reconstructing the evidence, it is likely that, 200 years later, King Hezekiah realized this, diverted the water of the Gihon, extended the city walls, and built around the Tower of David to mark, protect and hide this holy site for future generations. In doing so, his grief almost killed him.

The shocking revelations at this location will surely be a significant catalyst to change the status quo and existing states of mind. As such it presents enormous difficulties and challenges especially among religious Jews who are likely to constrict and dismiss this revelation reverting to their customary or orthodox interpretations of the Temple's location. In many ways our realization of the rectified state-of-mind and its expression through speech is the final redemption in which we all accept that knowledge constitutes a completion of our exiled state and if we learn to embrace all inputs as a holistic convergence, we get to experience and realize our ultimate and aggregate potential.

Mystics and scholars of the Hebrew Torah who left a trail of clues did so to promote this rectified state of exile emphasizing the holistic perspective; a world devoid of happenstance where every occurrence has its Divine purpose. Their written facts stare in Israel's face unequivocally declaring its sole and exclusive right to the land of its people. Other than for momentary abandonment because of acts of aggression against Israel since the time of Joshua more than 3000 years ago, Jerusalem has been held by Jews. Now Israel and its leaders must boldly pursue its inherent, often unexpected wisdom to dismiss with conviction and fortitude international leaders who demand Israels exiled state continue. Now is the time to finally take its rightful place as the nation by whom other nations are inspired and to complete the glorious mission started by Jacob so many years ago.

Posted by Kevin Bermeister at 2:58 AM No comments: