Beit El - and the future of Israel 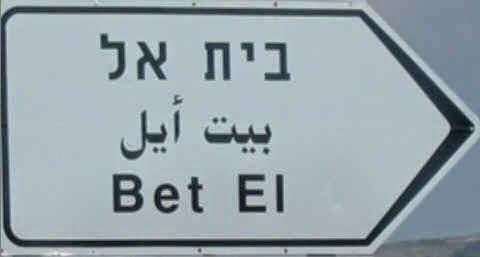 I was  recently asked to elaborate about a previous post - Solving the Riddle of Beit-El and Beit-el - the confusing complexity it was intended to be. I find this particular subject important because it continues to incorrectly influence present day thinking, in the negative and the source is ancient. For example, Dr. Ben-Artzi, the brother-in-law of Israel’s present Prime Minister Binyamin Netanyahu is a proponent of the negative view. Here is the alternative: That Beit el, north of Jerusalem was populated and re-established in 797 BCE to separate the tribes, north of Beit el from those of the south who had allowed Solomon’s Temple to supplant the cultural and historical importance of Beit El, South Jerusalem. This sup-plantation and separation continues to influence Israel’s views, sentiments and cultural integrity.

This story begins during the nations attempt to appoint their next King after the death of Solomon. The tribes of Israel struggled because Solomon’s son Rechavam of Yehuda, who was next in line was considered by many to be a shadow of his father. Against him was Yerovam (Jeroboam) of Ephraim who previously worked for Solomon, supervising construction in Jerusalem’s City of David, Shechem and collecting tax from the tribes of Joseph, but eventually he opposed Solomon. He fled to exile under the protection of Shishak, the Egyptian Pharaoh because of his outspoken views about the imposition of Solomon’s opulence. Yerovam returned from exile to challenge Rehavam and split tribal loyalty, in part by re-establishing an old center of worship at Beit el, north of Jerusalem on the border of land belonging to the tribe of Benjamin and Ephraim.

Yerovam was socially influential over the northern tribes, he aligned himself with prophets, priests and leaders of the north from Dan, Shilo, Shechem and Beit el. He used previous religious practices including idol worship to influence the tribes by placing two golden cow gods in temples and referring people to their significance as gods of people of prominence, including Moses brother and grandson who had engaged with them. During the southerly pilgrimage to Solomon’s temple, he blocked routes, diverted and attracted his tribesmen with bedazzling worship at the temples he constructed. Yerovam exposed Solomon’s impartiality toward idol worship, exemplified by the idol practices and requirements of Solomon’s Egyptian wife, to justify the disposition of his fellow northern tribesmen.

For his new nation, he set up an alternative priesthood and offered temple worship extravaganzas at which he offered sacrifices. On one festive occasion that occurred on the same days as southern tribes worship, a man from Yehuda (south) who was a prophet from Shomron (north) stopped Yerovam at the altar in Beit el by freezing his hands whilst he prophesied there would come a King Yoshiahu (Josiah) who would destroy Yerovam’s altar.Then the prophet released Yerovam and on his way home was tempted by a false prophet to eat and bless food, which he was not permitted to do, as a result he died.

Three hundred and thirty years later, the prophecy came true. Yoshiyahu was one of the last kings of Israel and the great grandson of King Chizkiyahu. He quickly made it his mission to clear Israel of its idolatrous altars including Yerovam’s altar at Beit el. The destruction of these altars is the subject of my previous post from which I conclude, that Yoshiyahu rediscovered the high ridge at the Gihon which his great grandfather dug-up during his major excavation of the water tunnel from the Gihon Spring to the lower pool at Shiloah. The once land filled high ridge may fit the picture of an area known as the Milo, which 330 years earlier Yerovam had become intimately familiar during his construction tenure with King Solomon.


Archaeologist Kathleen Kenyon confirmed the landfill of the east facing terraces to be the Milo. More recently Eli Shukron who was responsible for the high ridge excavation, on the same eastern slope, confirmed that soft earth covering the high ridge seems to have been deliberately placed to protect it. These indications suggest the Milo was a land filled area adjacent to a wall and may indeed fit the description of the high ridge. Although some claim the Milo to be further up the hill toward the temple mount, I claim the area of the high ridge is the location of Beit El Jerusalem, which coincides with the Milo.

King David who came to Jerusalem to capture Beit El  and Yerovam, like Chizkiyahu may have known that it was the origin of Jerusalem, but each were unable to reveal it in their time.The concealment of Beit El’s centrality, on the border of Binyamin (Benjamin) and Yehuda subverts Israel’s culture, Jewish life and law, back then, Yerovam exploited it to split the tribes and the kingdom.


Posted by Kevin Bermeister at 9:47 PM