Beit El of Binyamin on which border - Yehuda or Ephraim? 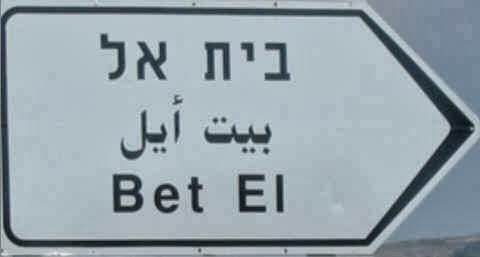 Three cryptic chapters written by the Prophet Shmuel (Samuel) at the end of The Book of Judges relate to the earliest period after Yehoshua (Joshua) led Israel in the conquest of their land and the establishment of the temporary mishkan (sanctuary) at Shilo. After Yehoshua and the elders of that generation, only the rear-guard tribe of Dan had not conquered and settled their allotment. It was then that these most gruesome chapters occurred. Strikingly the inter-relationships of each chapter emphasizes the competitive warring culture especially among the tribe of Yehuda (Judah), Binyamin (Benjamin) and Ephraim, with particular emphasis to the location of Beit El.

Simply, Beit El means House of God, but it was more than 400 years after the events of these chapters that they were compiled into a book at around the time the tribes of Israel finally agreed to a single site for their temple in Jerusalem. These chapters capture the preceding political, economic and social upheaval to define the temple's penultimate location on Binyamin’s southern border with Yehuda or its northern border with Ephraim.

The chapters begin with Micayhu (Micah) a man who lived with his mother in the Mountain of Ephraim close to Ephraim's southern boundary with Binyamin (18:2). There Micah developed a unique religion devoted to a significant silver idol. It was not a copy of nation gods rather it incorporated the name of God written by Moses and once used to recover the coffin of Joseph from the water of the Nile river in Egypt. He recruited a Levite boy, from the tribe of Yehuda who had lived in Beit Lechem (in the territory of Yehuda) to serve as his priest. The Levite boy Jonathan ben Gershom ben Menashe [Bava Basra (109b)] was the disenfranchised grandson of Moses and was well known to all the tribes. The superscript ‘n’ in Menashe was written by Prophet Shmuel to emphasize the evil actions of the Levite, expecting that with repentance the ‘n’ would be removed to revert the (Hebrew) letters to the name of his paternal grandfather Moshe (Moses).

The second chapter explains how the tribal leaders of Dan were unable to conquer their difficult allotment in the south along the coastal route occupied by Philistine Egyptian allies. Absent support from the other tribes they were embittered, so they traveled through Israel from Ashkelon (south) to conquer and declare Laish in the north (near the Golan) their land. Along the way, they stopped at Micah’s Beit el - house of god where they recognized the Levite. They took him and the idol and located it’s religious center further north close to the temporary sanctuary of Moses at Shilo (also referred to as Beit El). Most tribes, busy settling and defending their land, had abandoned their prescribed tri-annual religious pilgrimage to Shilo as such they were losing touch with the religion prescribed by Moses.

The chapters conclude when a Levite from the mountain of Ephraim (Shilo) went to Beit Lechem (Yehuda) to reconcile and recover his unfaithful concubine. On their return toward sunset, they passed Yevus (Jerusalem also known as Beit El - previously Luz)  because it was occupied by the heathen. They continued north through Binyamin to Gibeah where they sought overnight accommodation with an old resident. That night some Binyamite residents demanded the concubine, the Levite capitulated, they gang raped her and left her on the doorstep of the old residents home, where she died during the cold night. The incensed Levite took her back to Mountain of Ephraim where he dissected her body in 12 pieces and despatched a piece to each tribal leader demanding they support his request to force the leaders of Binyamin to hand over the perpetrators. When the Binyamite leaders refused, Israel’s eleven other tribes united in a civil war that killed more than 25,000 male members of the tribe of Binyamin, which was almost eradicated.

The juxtaposition of these three locations, Beit El at Shilo, Beit el of Micah and Beit El at Yevus provide further evidence of the cryptic message left by Prophet Shmuel. These tumultuous events underlie the vicious competition for the economic and spiritual benefits that would come by locating the nation's one and only temple on the southern (tribe Yehuda) or northern (tribe Ephraim) border of the land of Binyamin that separated them. The ultimate socio-dominant tribe would prevail in its conquest and Binyamin, wedged between the shoulders of Yehuda to its south and Ephraim to its north, would play a vital role and pay a hefty price. Competition and lobbying amongst the tribes to establish the site of a permanent temple plagued Israel, so much so that it took more than 400 years before King David was able to declare its location, after that King Solomon built it. The immediate response following King Solomon was upheaval. Yerovam ben Nabat divided the nation, re-established Beit el in the Mountains of Ephraim and directed almost half the nation to worship alien gods under his rule. At that time Yerovam ben Nabat led the 10 northern tribes to secede and plunged Israel into its protracted state of exile. To this day, thousands of years later the tribes are yet to be reunified.

Impressive and enormously complex, is the connection made by Prophet Shmuel, at the time of King David through Jonathan the Levite boy from Beit Lechem of Yehuda. This was none other than Moses grandchild and in a nation where bloodline counts, he was construed by the Prophet with the evil root in the soul of Ephraim's brother Menashe. Later, he or his reincarnate was named Shebu’el who repented and was appointed King David’s treasurer. However, under King Solomon the treasury was immediately headed by none other than Yerovam ben Nabat. Through Jonathan, Shmuel intricately connected Judges to Kings, to deliver the key that Jonathan who served David also became the false prophet in Shomron (after King Solomon) at the time of King Yerovam ben Nabat. Shmuel brilliantly emphasizes the economic woe these treasurers brought on the nation in pursuit of their false temples.

In an article I wrote after Pesach 2012 I deconstructed the cryptic Jonathan element of Shmuel’s message. Together these time separated 'Jonathans' spanning Judges and Kings, the period in which the Mishkan stood, make it abundantly clear that Shmuel intentionally wrote them as the key to decode his message and reveal the importance of the ultimate location of the permanent Beit El. The repetitive theme of these distinct time periods and the events that relate to Beit El and Beit el amplify the nation's great need to decipher the ultimate location in order to once again be unified.
Posted by Kevin Bermeister at 2:13 PM