Why Israel is the land of Kanaan! 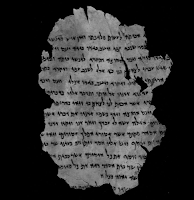 Why is Israel referred to as the land of Kanaan and who was Kanaan? Noah had three sons Shem, Ham and Yafeth. Some say Ham’s son Mitzrayim allegedly had a son Kanaan. This question has finally been explained in a physical proof discovered on a fragment photograph of The Dead Sea Scrolls found in cave #4. The opening lines of orthodox Jewish daily prayer beg the question of the verse;
Remember His covenant forever, the word which He commanded to a thousand generations; the covenant which He made with Abraham, His oath to Isaac, He established it for Jacob as a statute, for Israel as an everlasting covenant, stating “To you I shall give the land of Kanaan” -the portion of your inheritance, when you were few, very few, and strangers in it.
זִכְרוּ נִפְלְאותָיו אֲשֶׁר עָשה. מפְתָיו וּמִשְׁפְּטֵי פִיהוּ:
זֶרַע יִשרָאֵל עַבְדּו. בְּנֵי יַעֲקב בְּחִירָיו:
הוּא ה' אֱלהֵינוּ. בְּכָל הָאָרֶץ מִשְׁפָּטָיו:
זִכְרוּ לְעולָם בְּרִיתו. דָּבָר צִוָּה לְאֶלֶף דּור:
אֲשֶׁר כָּרַת אֶת אַבְרָהָם. וּשְׁבוּעָתו לְיִצְחָק:
וַיַּעֲמִידֶהָ לְיַעֲקב לְחק. לְיִשרָאֵל בְּרִית עולָם:
לֵאמר. לְךָ אֶתֵּן אֶרֶץ כְּנָעַן. חֶבֶל נַחֲלַתְכֶם:
בִּהְיותְכֶם מְתֵי מִסְפָּר. כִּמְעַט וְגָרִים בָּהּ:
What is meant by the portion of your inheritance? The strange, stylistic reference to Kanaan as the land promised to Israel is also explained by the recent Dead Sea Scrolls discovery. What was previously interpreted by mainstream theologians as the “tent of Shem” is “now proven to mean the “land of Shem” and what a huge difference it makes.
The discovery proves that land granted to Shem included the “portion of your inheritance” specifically set aside for Israel, but occupied by Kanaan when they “were few, very few, and strangers in it”. The explanation finally resolves a logical reading of the line - “To you I shall give the land of Kanaan”.  Here “you” conclusively means Israel.
Mitzrayim (after whom Egypt was named) and his brother Kanaan (Torah says Kanaan was Ham's son - Genesis 9:18) hated Shem because their father Ham lay with his mother, Noah's wife (Ki Teitzei 23:1) and Kanaan their product was cursed forever. Talmud Sanhedrin 108b states Ham copulated on the Ark against Noah's order of celibacy. Either way Ham’s act was judged antithetical to Shem and Noah's morality and set the standard for permissible incest among Egyptian leaders after Ham or Khem. The event set up the eternal desire for Kanaan to occupy the land of his curse, but it was not the land his father Mitzrayim or Ham had been bequeathed.
This is an essential legal proof of Israel’s continuity on the land and its indigenous right because Abraham was Shem’s direct descendant as such he was in line to receive the continual passage of rights to Shem’s land. Further, Abraham had two sons, Ishmael and Isaac, but the same legal standard documents Ishmael was born from a mother, a descendant of Ham operating as a surrogate for Abraham’s wife Sarah who relinquished Ishmael and any rights he had to ever inherit Abrahams land.

Posted by Kevin Bermeister at 5:54 AM