At Pesach I wrote an article http://israelfact.blogspot.com.au/2012/04/solving-riddle-of-beit-el-and-beit-el.html  explaining the Haftorah of the second day hints at important aspects that could help to locate Beit El, which relates to the final redemption of the Jewish people. The haftorah of last day Sukkot outside of Israel, in many ways the mirror of Pesach in the Jewish Calendar, tells the story of Joshua leading Israel’s return to redeem their land.

Motivated by the deepest convictions, the nation, Israel after enduring 250 years of exile from the land of its namesake was finally returning. The first alien city encountered, once the nation crossed the Jordan River into the defined borders of its land, was Jericho, which as commanded by God was to be destroyed entirely. Its the second city of Ay (Ai) that Israel was commanded to attack that presents a particular interest to the theory proposed. 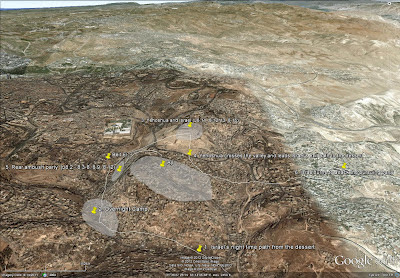 As described in the image above, (1) under the cover of darkness Joshua led an army of 30,000 men up the Judean mountains to (2) a camp below, or south of the then Canaanite city home to Beit El. Before daybreak, Joshua moved 25,000 through the valley between Beit El and Ay (today known as the Kidron Valley), where (5) a rear guard ambush party of 5000 troops remained, whilst the balance (3) climbed to the top of the hill (to the north - today known as Mount of Olives) across the valley that separated them from the city of Ay. At daybreak Joshua crossed the valley to taunt the guards and residents of the city, who on a previous occasion had successfully chased Joshua’s, much smaller, first invading party. The gates of the city were open and a similar pursuit soon began, only this time Joshua planned it to be a trap. By the time the army of Ay and Beit El had chased (6) Israel some distance, the ambush party (5) came up the rear attacking the city and setting it alight. Once the pursuers of Ay saw and realized their city was burning, they retreated and in their retreat, Joshua turned his retreating troops on them. In a pincer movement they were trapped between Israel’s main army and Israel’s rear guard ambush troop. The people of Ay were defeated and the city destroyed.


The suggestion here is a significant departure from the confusion brought by King Yerovam, which has plagued the Jewish people for thousands of years. An adoption of this theory would require a reconsideration of many previous interpretations. Centering the source of Israel’s holy connection to the location at the correct Beit El at the Canaanite city that became the City of David has been a long time coming.
Posted by Kevin Bermeister at 5:21 PM